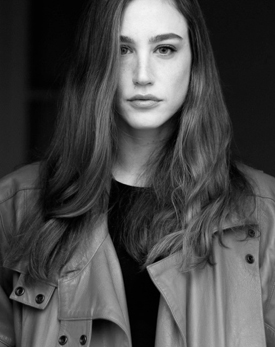 Anna Papathanasiou is a Greek- Canadian interdisciplinary artist. With roots in the fine arts and music she has created a unique language through video, performance, installation and sculpture works.
A founding member and leading singer in the grunge band Puta Volcano Anna has studied Classical Piano and musical theory at the Athenaeum Maria Callas Conservatory, she has graduated from the Sports and Physical Education University [DUTH], holds a Bachelor and an MFA at the Athens School of Fine Arts [ASFA] in Visual Arts and performance.
Her works have been exhibited and performed in the U.S, Japan, Germany, Italy, Lithuania, Greece and Canada and as a musician, she has toured in Europe and has performed alongside artists such as The Black Keys, The Black Angels, Fu Manchu and Alice in Chains.
She presented her live piece “EAT” in New York, during the “The Time Bomb Gala” as a resident artist (Southampton, NY) at the Watermill Center under the direction of Robert Wilson. She has performed the piece “Empathetic Body” at the Architectural Biennale of Venezia, the #SKG Bridges Festival and the Kaunas Biennial. Completed her residency in La Serre Arts Vivants at Ecole Nationale De Theatre held at Monument National in Montreal, Canada. Co-created and performed the three hours long site-specific performance “Outland” presented at Rooms, held by Kappatos gallery. Performed at the “Some Sort of Now” project, a travelling documentation that took part at cities of France, Spain and Andorra showcasing the brutalist architecture of Ricardo Bofill. Her video-performance “Christmas Tree” was exhibited at the Art Props, Kunst- Interventionen in Mannheim, Germany while she has also presented her works in the form of video, performance or public interventions in Japan, Digital Biennale, Electric Nights, Palais de Paris, Tokyo, “Infantry Square” Greece, Athens Biennale, Omonoia, and “Whispering in a room of Screamers”, Acropolis at the Bottom. She worked as an artistic collaborator at the production of “Elenit” by Euripides Laskaridis presented at Stegi, Onassis foundation in 2019 and is a founding and active member of F.T.I.J.s group and Das Ist Genau collective.

The prevalent theme throughout my work is the connection with the sense of the "self", on both a personal level and in terms of social interaction and its place in social structures. By inventing imaginary personas/characters, mainly genderless, I use kitch and occult artistic codes in an effort to raise questions about the topics of sociocultural and sexual identity. I am interested in the research of the stereotypical leaders' image/ profile and the behavioural patterns through which it manages to get detached from the masses, leaving a mark on the society. I would like to conduct a thorough investigation on the subject of self perceived image and narcissism, as they are rapidly gaining ground, while we race towards an increasingly dystopic cyberpunk version of the modern world. That in turn impedes our connection to tradition and the spriritual environment.